Book review: To Whatever End by Lindsey Frydman 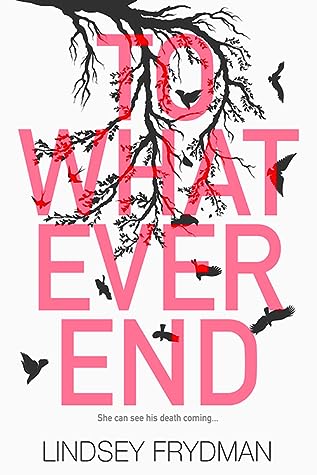 I was totally sucked in by the blurb on this one.  The first time Quinn touches a new person, she sees a vision of the last time she’ll see them.  I was intrigued.  As it turned out, sometimes she foresaw the end of a brief encounter with a client, with them just walking out the door, sometimes she foresaw a huge argument.  This time, she foresaw a death.  Specifically, Griffin’s death.  In her vision, he dies in her arms, telling her that he loves her.  And this is all seen by her in the first moments they meet.  Wow, that’s tough.  Imagine meeting a total stranger and knowing that not only were you and he going to fall in love (or at least, he with you) but also that he was going to die.  And from the appearance of him in your vision, that death wasn’t far off.  Freaky.

Unfortunately, I didn’t much like Quinn.  She had this whole saviour complex and it turned her into someone that, frankly, I wouldn’t have fallen for and I couldn’t understand why Griffin did.  In her quest for clues as to who the murderer might be, she was nosy and insensitive, and frequently sent mixed messages.  I am totally bewildered as to why Griffin put up with it.

I found the murderer relatively easy to predict, along with his motives.  I would have liked just a little more suspense.  I did not, however, figure out how there could be a happy ending for Quinn and Griffin.  In the end, I was a little bit disappointed in how the author played that out.

I did like the backstory into her mother’s version of the curse and found that quite interesting.

On the whole, I thought the premise was great, Griffin was nice, and the overall execution of the story was a little lacking.