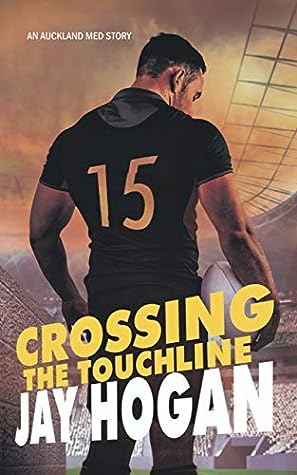 This is the second book in the Auckland Med series.  I read the first one in 2018, and I’m not sure why I didn’t carry on with the series, but I do that sometimes and pick them up later.  Case in point.

I found this book fascinating for two reasons – Cam and rugby.  Let me talk on the rugby issue first.  I’m a New Zealander, born and bred.  I have expressed before (in this blog) that I generally don’t like sports romances.  Yes, I’ve liked some, but the whole sports thing tends to put me off, so it has to be done really well.  And this book kinda took that preconception and threw it away.  Why?  Because I understand rugby.  My husband is an avid All Blacks fan (I literally got in the car after finishing this book on the train to find my husband wearing an All Blacks supporter shirt and shorts, even though they’re not even playing at the moment!).  I grew up watching my dad play rugby and I’ve been to stadiums and watched professionals play rugby.  The 2011 Rugby World Cup was held in Auckland, where I live, and it was such a rush.  So yeah, even though I might not be a rugby fan myself (will I be disowned by my fellow Kiwis if I admit I don’t know who the current All Black captain is?), it is a game I am well familiar with and understand.  And I was surprised by how much of a difference that made to my enjoyment of the book.  Rueben starts the book as a Blues player (the Auckland team) and an All Black wannabe.  We see some of his games, and of course, it is a big part of his life.  He is a professional rugby player.  And I understood it all.  I didn’t skim over it, like I usually do when it’s ice hockey or gridiron.  It was…eye opening.  I can actually kinda understand why people enjoy these sports romances now.

But Cam.  He was brilliant.  He’s the nurse in charge of the ER at Auckland’s busiest hospital (which the author has renamed Auckland Med).  He is feisty, strong and wears makeup.  He has a ‘don’t mess with me’ vibe that I actually felt came out more strongly in other books than this one.  In this book we see more of Cam’s softer side.  As much as I appreciated that inside look, I would have enjoyed seeing a little more of the spitfire side of Cam in this book too.

My absolute favourite scene is the one where the All Blacks show their support for Rueben.  I could feel that power and that moment of intense emotion from doing the haka and then to move into that show of support was awesome.  So well done.  I wish I hadn’t waited so long to read this book, and I will definitely be reading the rest of the Auckland Med series.