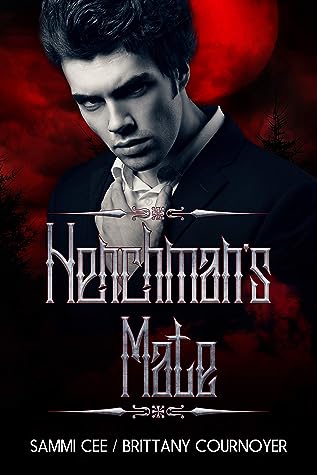 You know how you hear about heroines who are too stupid to live? It’s not generally a problem I come across in books. Perhaps I have a generous nature and allow that people can make mistakes or that they’re approaching situations from different perspectives than the reader and therefore make choices we disagree with. But Darren? Darren is seriously too stupid to live.

He meets Cy in a club. Describes him as ‘the most dangerous specimen I’d ever seen’. Cy makes it clear that he’s not interested in Darren and Darren ‘accepts’ that but continues to chatter away to him. The bartender warns him away from Cy, but he pays no attention. Then Darren witnesses Cy kill a man outside the club. Not only does Cy kill the other man, but he transforms into a demon to do so. When Cy realises that Darren has seen him, he says ‘Come with me if you want to live’. Okay, not in those actual words. He actually says ‘If you want to stay alive, you need to come with me’ but it was funnier in the pseudo Terminator voice I imagined in my head. And yes, the author(s) does make a Terminator reference later in the book.

So you’ve got a guy who looks ‘tall, dark, and scary’ (and yes, that’s a quote), who just transformed into a demon and killed a guy, saying ‘Come with me if you want to live’. So what does Darren do? He gets in the car and goes with him.

Darren has the presence of mind to think ‘I should call my mum and tell her who I’m with and where I am, in case anything bad happens’. Oh wait, no, he doesn’t. He thinks ‘If I don’t come home, my mum will worry and send the cops out to look for me and they might arrest this really nice man who has done nothing wrong’.

I just…can’t. So Cy takes Darren’s phone. At this point, Darren should be shitting himself, but he’s not. He’s just like ‘If you’re going home to sleep, I’m gonna be so bored because I can’t read my book on my Kindle app now that you’ve taken my phone.’ I paraphrased.

Even Cy doesn’t understand Darren’s naivety. ‘You watched me kill a man not half-an-hour ago, and it’s your accommodations that have you unhinged. Do you not fear me?’ But of course Darren is too stupid to live and of course he doesn’t fear Cy the killer demon. Le sigh.

The book goes on in this vein, until eventually Cy takes Darren back to Darren’s home a number of days later. During this time, Cy has been texting Darren’s mother so she won’t worry, but he hasn’t given Darren back his phone. Oh, and Darren has had multiple opportunities to leave, but hasn’t, because, you know, why would he?

Anyway, apparently Darren’s mother found it obvious that it wasn’t Darren texting her because Cy texts differently. Was she worried that her son disappeared and some random stranger was pretending to be her son and telling her that her son was fine and not to worry? No, of course not! Obviously he was fine and she shouldn’t worry.

Seriously, what the fuck??! I can see where Darren gets it from at least.

There were some good components to the book, such as the dream meetings, the father’s plans, the other demon and so forth. But none of that was enough to make up for not one but two characters who were too stupid to live. Two stars.