Book review: Prisoner of My Desire by Johanna Lindsey 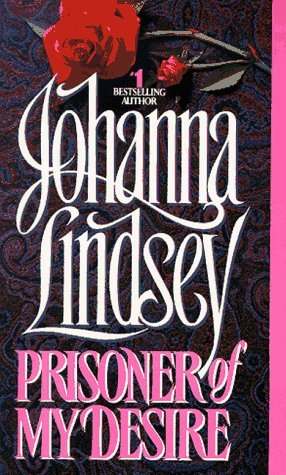 Last month I read an interesting article by Jennifer Pokop about Johanna Lindsey who recently passed away.  The author of the article was noting the way Johanna Lindsey and her work was being remembered and noted in obituaries and mainstream press.  I found it quite thought-provoking.

I wouldn’t say I’ve read a LOT of Johanna Lindsey books, but I have read a few, mostly in my teens and early twenties.  Prisoner of My Desire was always my favourite.  I still have the paperback copy of that novel that I first read.

I re-read it today (in ebook format), and it is interesting how different my views are now, as a 40 year old woman (yup, I turn 40 next week!) compared to when I was in my teens or early twenties.  Although, how much of it is a change in my own maturity and how much of it is a change in the way society thinks is questionable.  These days even fiction writers are expected to be more politically correct, so as not to perpetuate societal ills such as racism, sexism, etc.  I would have definitely given the book five stars when I first read it.  It’s engaging and easy to lose myself in the story.  These days I noticed things like when the point of view changed from character to character from one paragraph to the next, something I now know is referred to as ‘head hopping’.   There were also times when the reader was informed of things that were still unknown to the character, which is generally considered a no-no in writing these days.

It had been the room that her husband had used for his debaucheries with the female serfs under his rule, though Rowena did not know this.

But I guess ultimately it was the poor treatment of the main female character that was harder to accept.  The main male character was mistreated too, but there was definitely more ill treatment of the female.  And it was easier to brush that off when I was younger, but these days my mind thinks ‘Is this the kind of book I want my impressionable daughter to read?’

But even with those thoughts, I still had to give it at least four stars.  Because I liked the characters and I found the story easy to read for the most part, and I kept turning pages because I wanted to know what happened next, albeit that I knew the overall gist of the storyline from having read it before.

But yeah, it’s interesting having a ‘mature’, modern perspective on it, twenty years (give or take) since I first read it.  I suspect it wouldn’t be published as it currently is, these days.  It would be edited to fix the head-hopping, and I wonder if the mistreatment of the female lead would remain.  Of course, it’s entirely appropriate to the era in which the story is set, in the 1100s in England which is pretty important to note.  Women certainly didn’t have the rights or respect in those times that modern women have.  And I guess ultimately you have to understand and accept that when you read it.  Perhaps the female lead is too quick to forgive all the mistreatment done to her, but again, she’s a product of her time and thinks little of it for the most part.  Hmm…  Interesting.

Click here to read the original article by Jennifer Prokop.