Book review: Flowers from the Storm by Laura Kinsale 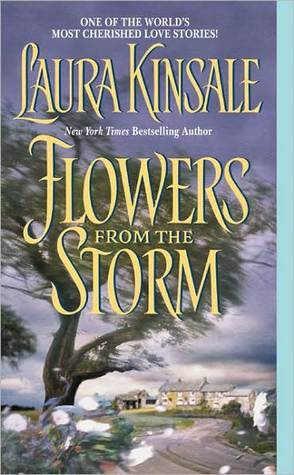 This is a seriously powerful story.  The blurb doesn’t even come close to doing it justice.

The Duke of Jervaulx is fairly typical of young men in the Regency period who are rich and single.  Wait, that’s not restricted to a single time period!  Ha ha!

He is self-indulgent and reckless.  What makes him different is that he’s brilliant at mathematics.  So is Maddy’s father, although that’s where the similarity between the two men ends.  Maddy and her father are poor Quakers and because her father is blind, Maddy writes most of his mathematical notes for him.

But the story really starts when the Duke, Christian, has (what is assumed to be) a stroke and he loses his capacity for language (both verbal and written) and his fine motor skills.  In his time period, they didn’t have the medical knowledge to know what had happened to him, and they assumed he’d gone mad.  Even though he was perfectly sane, he had no way to communicate that, and was sent to a very exclusive home for patients with mental health issues.

It’s impossible as a reader not to be moved by Christian’s plight.  It is too easy to see how he could end up in that situation, and too easy to imagine the horror of not being trapped in our own body unable to communicate with the outside world but with full comprehension of what goes on around us.  Even in today’s world of modern medicine, we hear of patients who are trapped inside their own bodies, unable to communicate.  The only real difference is that we know they’re trapped and still mentally capable.

Maddy gets a job working at the facility where Christian is being looked after, and she recognises him from interactions they’ve had over mathematics.  She comes to understand that he’s not insane but rather trapped inside his body unable to communicated, and the story goes from there.  It is by no means smooth sailing from there, and there were times when I wondered how the many issues in their world could be resolved.  That Christian’s a smart cookie though.

If you like historical romance, powerful stories, strong characters (Christian more so than Maddy) and something outside the box, I definitely recommend this one.