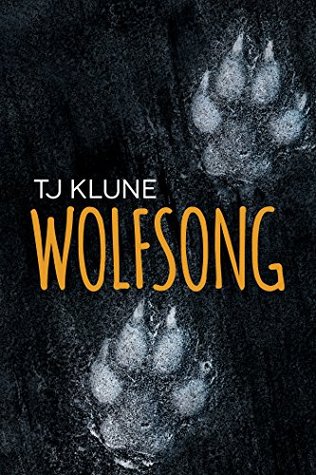 This book was recommended to me by several people, including Sionna from Books In Her Eyes.  I don’t know what I was expecting, but it doesn’t matter, because this book surpassed all my expectations.

I was a bit bewildered at the beginning of the book until I realised that the narrator (the whole book is told from Ox’s perspective) was only 12.  The style is reminiscent of the first Harry Potter book in that sense, told with an almost childlike simplicity that then matures as the character matures.

He started spinning his storm again, voice rising up and down, words forcefully punctuated without pattern. “Mom! Mom. You have to smell him! It’s like… like… I don’t even know what it’s like! I was walking in the woods to scope out our territory so I could be like Dad and then it was like… whoa. And then he was all standing there and he didn’t see me at first because I’m getting so good at hunting. I was all like rawr and grr but then I smelled it again and it was him and it was allkaboom! I don’t even know! I don’t even know! You gotta smell him and then tell me why it’s all candy canes and pinecones and epic and awesome.”
They all stared at him as if they’d come across something unexpected. Mark had a secret smile on his face, hidden by his hand.
“Is that so?” the woman finally said. Her voice wavered like it was a fragile thing. “Rawr and grr and kaboom?”
“And the smells!” he cried.
“Can’t forget about those,” the man next to her said faintly. “Candy canes and pinecones and epic and awesome.”
“Didn’t I tell you?” Mark said to them. “Ox is… different.”

Despite that, the writing is absolutely beautiful.  Poetic.

He looked down at his feet and kicked a dried-out leaf. Somewhere, a bird sang a song that ached.

The story is that of Ox and Joe.  First the author builds up a picture of Ox’s life before Joe, and I don’t mean to give the impression that this is tedious, because it’s not, but things definitely pick up pace after Joe arrives on the scene.  The earliest part of the story feels necessary though, because it paints a picture that is crucial to understanding Ox.  And, in truth, to understanding his friend Gordo who plays a big part in the story and in Ox’s life (and stars in the sequel).

Someone told me once that the light we see from them is hundreds of thousands of years old. That the star could already be dead and we’d never know it because it still looked alive. I thought that was a terrible thing. That the stars could lie.

Ox quickly becomes not only friends with Joe and his family, but part of their family.  Ox doesn’t have many people to call his own, so this love and acceptance is a truly wonderful thing for him.  We see all their interactions from Ox’s point of view, and then sometimes, we’re given new information or a new perspective and it changes everything.  At more than one point, I skipped backwards to re-read a scene with a fresh perspective on the events that had taken place.  It was very clever.

We lay on the grass watching the stars above us. We were all angles and parallels, stretched out and touching in some way.

I don’t want to give too much away, and I actually think the blurb itself contains too many spoilers.  The less you know, the more you’ll enjoy the book.  Joe and his family are wolf shifters.  If you’ve read wolf shifter novels before, I promise this will be different.  The author did some fabulous work on making the reader understand how different it was from being human and what it meant for someone like Ox to be accepted as part of their family, their pack, but not be a wolf shifter.  I thought it was very well done.

But then bad things happen and life changes dramatically for Joe and Ox.  They have to re-evaluate how life works and how their relationship fits into their new lives.

Our eyes met like a car crash, colliding and breaking away.

One of the things that I love is that Ox, who struggles so hard to believe that he is worthy of anything, realises that while he loves Joe and desperately wants Joe as his partner in life, he doesn’t need Joe and he can stand on his own two feet and actually do bloody well at it.  It’s not often you get that in a romance novel.  And it doesn’t make their love feel any less special or strong, it’s just that Ox finally believes in himself (the way Joe has believed in Ox from the very beginning).

The story is beautiful and poignant and heartbreaking and satisfying and definitely worth the five stars I gave it.  I’m looking forward to reading the sequel which stars Gordo.  This is one of the best books I’ve read this year, and I think Ox is the most interesting, well-created character I’ve encountered since Alex from L A Witt’s Static and Cole from Jaime Reese’s A Restored Man (and that’s bloody high praise since Cole is my favourite character of all time!).  The vast majority of the book is not steamy, although there are a couple of sex scenes.  The focus is far more on the emotional relationships.  Definitely read it.  You won’t regret it.