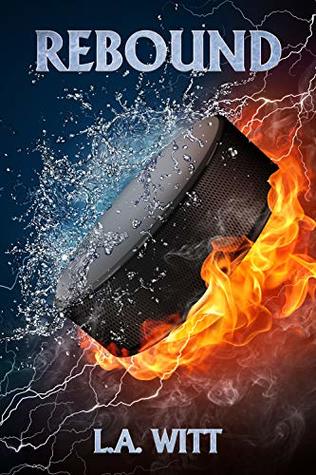 As a general rule, I try to avoid novels featuring sports stars, and in particular, stars of American sports.  I decided to give this one a try because I’d read a book by this author before that had really wowed me, and I wanted to read more of her work.

Geoff is a cop, and he’s just left a long-term relationship where he was emotionally bullied and manipulated.  His teenage children had no idea what was going on behind the scenes and resent their father for leaving the ‘stepdad’ who had treated them so well.

Asher is the ice hockey star, and when he tries to break up with his physically abusive boyfriend in a ‘safe, public place’, the cops end up being called and that’s how Geoff and Asher meet.

Geoff goes out of his way (like, seriously out of his way) to help Asher after the scene at the restaurant.  I was questioning how realistic that was, but then Geoff’s partner started questioning it too,  making it clear that this was not normal police behaviour.  That helped me as a reader, because I felt like the author was acknowledging that Geoff was behaving weirdly.  And he was doing it because he was both attracted to and felt empathy for Asher.

Overall, I thought the story was sweet.  The characters felt real.  I felt like there wasn’t enough conflict to make it really gripping or involved, but that was okay.  It was sweet.  Sometimes you just want something easy and sweet, yeah?  Not that this was particularly easy in that both men were dealing with the aftermath from the relationships they’d been in and the way they’d been treated by their respective partners, but between them, it was sweet.  Steamy, yes, but still sweet.  Okay, I promise I’m not going to use the word sweet again!  It definitely made me smile a few times, and I like that in a book.

“Frat Boys on Ice?” I laughed. “That’s even better than the Magnificent Dumpster Fire Riots.” He chuckled. “Maybe they could be our opening act.” “I’d buy tickets.” I wrapped my arm around his shoulders and drew him closer. “With bands like that, it definitely wouldn’t be a boring show.”

One thing I particularly liked is that there’s no ‘magic cure’.  Neither of them get over their past relationships just because they’ve found a new one, and Geoff’s nightmares resulting from PTSD from his combat days don’t suddenly disappear now that he’s sleeping with Asher.  The author acknowledges that these things take time, and sometimes the answer is to work out how to live with the things that don’t go away.

The ice hockey thing didn’t bother me too much (remembering that I’ve never seen an ice hockey game in my life) but I did feel like Asher (and therefore the author) were a little too insistent on this idea that an ice hockey player has to be aggressive on the ice (because fighting is part of the sport) and explaining to Geoff (and the reader) how that’s separate from aggression or lack thereof off the ice.  That point was a wee bit laboured, but it didn’t significantly detract from the book.

I gave it four stars out of five, which is impressive from me for a book featuring an American sports star.