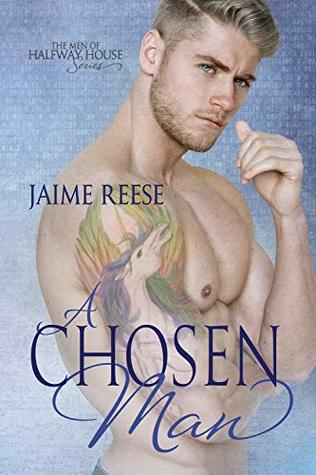 This is the 6th book in Jaime Reese’s Men of Halfway House series.

Wall is a secondary character we’ve encountered previously, who talks very little.  Like, ridiculously little.  So I was curious to see how Jaime would portray his story.

I loved Dylan.  He reminded me of Cole, a previous character.  Dylan has a powerful memory and can remember virtually everything he reads.  The author didn’t explicitly state that it was a photographic memory, but it obviously was.  He’s also a tech genius, specifically a hacker.  But then comes the similarity to Cole – the habit of saying the wrong thing at the wrong time because he doesn’t fully understand the nuances of normal, everyday social situations.

Both Dylan and Wall have had previous relationships that scarred and/or traumatised them, and led them to being wary of new relationships.  Built into this is the explanation of why Wall is so quiet, and how Dylan ended up in jail.

It wasn’t the guy, or his smile, or the sound of his voice. It was the promise of the dream. And, at the time, he probably would have accepted that from a three-legged iguana shifter if it had been able to speak that promise to him.

I felt that the relationship between Wall and Dylan healed both men to a point where I felt like some of their stronger personality traits weren’t so obvious anymore.  Wall talked a lot more than I expected, and Dylan learned how to concentrate on his surroundings and what reactions were best in a given situation.  I was a little disappointed that they became more ‘normal’.  I didn’t feel like that happened with Cole, or even Adrian, who were strong characters that remained strong characters but found someone who loved them anyway.  Wall and Dylan changed each other.  For the better, sure, but…  Anyway, I dropped a star off my rating for that.

I added a star to my rating for the humour.

He imagined he would be crapping sugar cubes at any moment.

I kept laughing aloud as I read, and I love a book that can do that for me.

Wall didn’t know shit about computers, programming, and wouldn’t be able to find the dark web in a well-lit room.

The relationship between Wall and Dylan didn’t have enough tension or conflict to really keep my interest.  Their relationship was very sweet.  There was external conflict, which came from the men chasing Dylan.  The ‘escaping the bad guys’ sections of the book were easily my favourite, although Wall’s mum was very cool and I liked her a lot.  If there had been more conflict, I think the book would have been stronger.  As it was, I felt it was a three star read, taken to four stars with the humour.  If you want a sweet read that will make you smile, check it out.