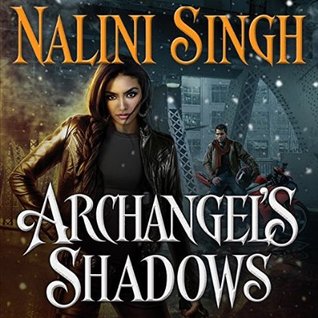 This is the 7th book in Nalini Singh’s Guild Hunter series.  When I looked ahead in the series, I was disappointed to see that I was going to have read through Ashwini and Janvier’s story, and then Naasir’s, before getting back to the primary and secondary characters.  I felt that Ash and Janvier were tertiary characters to date, and we’d seen so little of Naasir even though he was on of Raphael’s Seven, and what we had, I didn’t like.  I wasn’t looking forward to his story at all.

But I’ve been enjoying the series, especially since switching to the audio versions, and I wanted to continue to follow the overall arc.  I wanted more of Illium and Aodhan in particular.  So it was with some reluctance that I started on Archangel’s Shadows.

Firstly, as someone who lives in New Zealand and has never been to America, I’m glad I listened to the audio book.  I could never have imagined Janvier’s accent correctly!

We knew already that Ash was pretty kickass, and a little crazy, and she didn’t disappoint in that regard.  There was a big build up to finding out why Ash was holding Janvier at arm’s length, and why she refused to consider becoming an immortal.  I was sceptical, I admit.  I was afraid this was going to be one of those ‘if you’d only talked to me’ tropes, where she had misconceptions and it had kept them from being together for ages and once she ‘fessed up, Janvier would sort them and they would have wasted so much time.  But I was pleasantly surprised.  I should have known not to doubt Nalini Singh!  I don’t want to give away any spoilers, because that would truly ruin the book for you, but it’s a good reason, and even Janvier has to agree that it’s a good reason.

The hunt that runs through the book helps keep the momentum going, and provides action, conflict and insights into both Ash and Janvier.

We see a lot more of Naasir in this book, and now I really want to read his book!  I hadn’t expected that AT ALL.  He is sweet, amusing and fascinating, and I really want to see how Nalini expands on that.

I was a tad disappointed at how neatly things were wrapped up at the end of the book, but unsurprised.  And that was really the only part where things were too easy for the characters.  Both Ash and Janvier stayed in character the whole book, which is good.  I gave it four stars.