Book review: More Than We Can Tell by Brigid Kemmerer 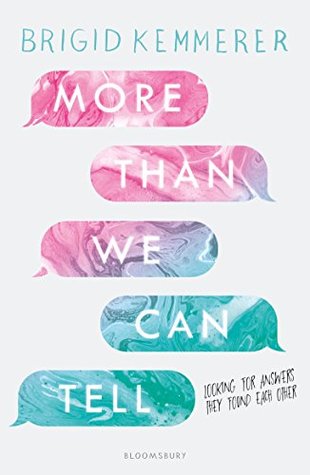 Man, you know it’s a good book when you care enough about the characters to cry when they’re hurting.  This book made me cry.  More than once.  And I couldn’t put it down.  I was up until after midnight last night, my husband fast asleep beside me, and I couldn’t stop reading.  Thank god I could sleep in this morning!

The main characters are teenagers who are attending high school.  Their actual ages confused me because I’m not used to the American high school system, but I eventually worked out that they’re about 18 and 17 respectively.  With this in mind, this is not a steamy book.  If you’re after sex, find another book.  And yeah, there’s plenty of angst, but don’t panic, this is no Twilight.

Rev and Emma are two very different characters.  Rev was adopted after being abused as a child by his natural father.  I say abused, but it seems ‘tortured and mind fucked by a religious fanatic who has gone off the deep end’ would be more apt.  Seriously, tortured.  He’s been through things that most people couldn’t imagine.  The kind of things that leave scars on the outside and scars on the inside.  The kind of things that leave you wondering how you can move on to be a normal human being.

‘I’ve wondered how my father turned into the man he was. The man he is. I know about the cycle of abuse, and I’ve spent a lot of hours wondering when I would start to change.’

Rev is a truly believable character, and I think that’s what makes this book so powerful.  It’s not ridiculous over-the-top dramatics, it’s moments of self-doubt that the author puts into context.  The introduction of Rev’s foster brother, Matthew, also works really well.  We see Rev’s protectiveness, his fear, his compassion and his self-doubt, and they’re all highlighted by this other boy who has his own issues going on.

I’m trying really hard not to give too much away, so forgive me if I am being too vague!  I don’t want to ruin the story for you!

Emma is a gamer.  More than that, she’s a coder.  She wrote her own game.  At first, her worries and concerns are very relatable.  They’re the kind of concerns every teenager goes through.  Mum is too critical and doesn’t want me wasting my time on a hobby that’ll never turn into a dependable and secure income.  Dad never has time for me because he’s always working.  My friend and I are growing apart because we’re interested in completely different things.  Those kinds of things.  Even when her parents announce their divorce, this is all still within the realm of normality.  This helps balance the book somewhat because for most of us, Rev’s issues are not relatable, but we can relate to Emma and thus to her interactions with Rev.

‘He’s wearing dark jeans and a hoodie, and the hood is large enough to put his entire face in darkness. I feel like I’m talking to a Sith lord.’

There were times when I felt like slapping her for the way she spoke to her mother and her best friend, but this may have something to do with the fact that she’s the same age as my son.  Emma’s real drama starts when she encounters a troll in the game she built.  This, too, is something that many people can relate to.  I certainly can.  People who either outright bully you online, or people who pretend to be your friend and then screw you over when you least expect it.  I’ve encountered both, and the latter are heartbreaking.  Emma’s dad tells her that trolls are a matter of life in the gaming community.  Truth.  Rev tells her that the behaviour of the troll is in no way right or acceptable.  Also truth.

The drama is not all in their heads, and there is plenty of real action and interaction, but I don’t want to give too much away.

There is definitely a romance between Rev and Emma, but by the time I was halfway through the book, I couldn’t have cared less if this was a romance or just a YA drama.  I was invested in the characters and just wanted everything to work out for them.  Rev seriously tugged at my heart strings.  I thought his parents were great too.  I know they were a little too perfect, as a foil for Rev’s natural father, but that’s okay.  It kind of felt like he deserved them after everything he’d been through.  And we know that people like them do exist.  Amazing people who do everything they can to help an abused child find safety, peace and happiness.

I highly recommend this book.  It’s definitely worth the five stars I gave it.  Sure, I could see a couple of things that could use improvement, but when I was reading at midnight with tears streaming down my face, I couldn’t have given a crap about them.  It’s a powerful read, and despite everything, it leaves you feeling like there are good people in the world, and we can be one of them.  It makes you want to reach out and give someone a hug.  Read it.