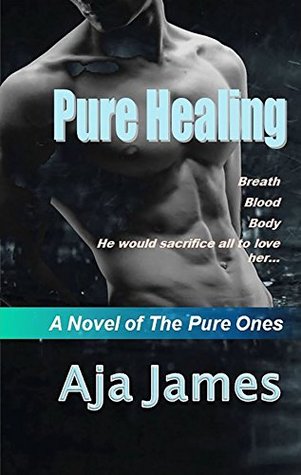 Pure Healing is the first book in a series called Pure/Dark Ones.  So far there are five books in the series, although only the first two have been published so far.

Similar to the Immortal Guardians, in this series, there are humans and others.  The bad others are vampires or Dark Ones.  The good others are Pure Ones.  I haven’t quite worked out how the others are different from humans.  It seems to be some kind of reincarnation after death.  The Pure Ones are not allowed to have sex except with their mate.  No mate, no sex.

This book is primarily about the romance between Rain and Valerius.  Rain is the Pure One’s healer.  Valerius is one of the elite protectors of the Pure Ones.

The role of the healer is an interesting one.  She appears to use her life force to heal, and so every ten years she needs to recharge her life force.  She does this by taking a consort for three months, and by drinking his blood and his…well, you know… she recharges enough for the next ten years.  The stronger the consort, the stronger the healer becomes.  And Valerius is the strongest of the Pure Ones.

Valerius is very old.  His father was a Roman gladiator.  After his father was killed, Valerius was sold as a sex slave.  This period of his life has left him unable to offer himself up to be Rain’s consort.  And yet, with Rain refusing to take the same consort more than once (there’s a story behind that), she’s down to weak men who will be unable to recharge her sufficiently to sustain her for the next ten years.

This book skips a little bit between various Pure Ones, and one Dark One, in order to set up various threads that will weave through the story arc.  I found it a little disorientating right at the start, because we start with the Pure One’s queen, and not either of the two main characters, but otherwise it was fine.

I gave the book four stars, and I was definitely keen to read more.  I was a little baffled though to realise that the next three books are all ‘dark’, and it’s only the fifth book in the series that goes back to the Pure Ones.  That seems weird to me.  Like maybe alternating would have been okay, but three dark ones in a row?  I guess I’ll have to read one and find out.  But this book hasn’t set me up to be a big fan of the Dark Ones, so…

But yeah, if you liked Immortal Guardians or the Midnight Breed series, definitely give this one a go.