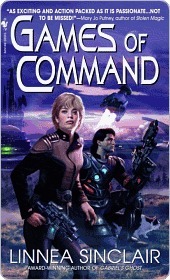 Games of Command by Linnea Sinclair is a science fiction romance, set some time in the future.  My first impression was that it reminded me of Star Trek, and I initially wondered if it was fan fiction.

There’s somewhat of an ‘enemies to lovers’ trope, with Sass and Branden on the outs at the beginning.  There is a lot of hidden history though, that the author slowly reveals to us.  And to Sass.  I wasn’t sure I liked the idea of Sass having a ‘sneak peek’ into Branden’s personal feelings, but she does later share with him that she has this knowledge.  It’s interesting to wonder how the story would have changed if Sass hadn’t had that insight though.  Would she have found it harder to look beyond Branden’s closed-off façade?

Branden is a cyborg (born human but upgraded with computer technology to be super smart, fast, strong, etc).  Sass is human.  This difference plays into the tension between them, especially on Branden’s part as he can’t understand why any human would find a ‘machine’ attractive.

Most of the story takes place on the spaceship where Branden is the Admiral and Sass is the Captain.  I’m not sure why you’d have an Admiral and a Captain on the same ship (seems like overkill to me) but what do I know?  Despite my first paragraph, I’m not a Trekkie.  Later though, the story moves to a small ship, a planet and back to the small ship.  This forces Branden and Sass to interact more, as they learn to depend on each other for survival.  I felt that this was where they both truly came into their own.  Branden risks his life to save the others, and this is one of the clearest moments up to then when we (and the other characters) see that he is not an emotionless machine.  We are given insight prior to that, but this is where he lets his mask fall and shows us.

There is a secondary romance that also plays out alongside the main one.  I enjoyed this.

There was only one thing that really bugged me, and it was minor.  There are creatures called fidgets, which appear to all intents and purposes to be the equivalent of domestic cats (although they have abilities domestic cats don’t have, as you’d expect in science fiction).  The author takes this comparison and runs with it.

‘Me? Nervous as a long-tailed fidget in a room full of rocking chairs.’

Seriously?  Does changing it from a cat to a fidget actually make that saying work in a science fiction world of spaceships?  People barely use rocking chairs in 2018 let alone many years into the future.  And if you’re going to invent new worlds, new species, etc., invent new sayings!  Don’t just take old sayings and repurpose them!

‘Fuck you and the equinnard you rode in on,’ she told it.’

Ugh. ‘Equinnards’ seem utterly irrelevant in a world where people could live their entire lives without setting foot on a planet surface.  But it was a minor detail and certainly not enough to stop me from re-reading or recommending the book.

I did think the rest of the story was well written.  It was very easy to read, it flowed well, it had a nice balance of action and rest, and the aliens and alien-technology fitted into the story well without making the reader go ‘huh?’.

All in all, I enjoyed the book.  I gave it four stars.