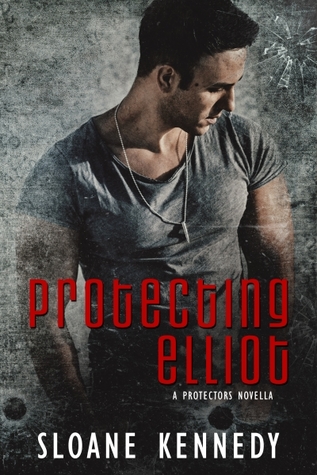 So, for week two of my reading challenge on Writing.com, I had to read a book written in first person point of view.  Protecting Elliot is actually book 9.5 (it’s a novella) in Sloane Kennedy’s Protector series. I haven’t read the nine books that come before it, but I have read books #1, #3 and #7 in the series. The great thing about this author is that she writes each book so that it can be read as a standalone book, however characters from other books do make appearances. In this book, rather than featuring characters from earlier in the series (to my knowledge, although I’m sure there are cameos), it features Declan from Saving Ren, which is book #3 in the Barretti Security series. And I know the Barretti Security intersects with with Logan’s Need which is book #3 in the Escort series.

Anyway, this book starts with Declan, who is a police detective, hiring Cruz as a bodyguard for Elliot, without Elliot’s knowledge. Declan was, in a twisted fashion, involved in the death of Elliot’s father, and harbours a lot of guilt over it. Elliot blames Declan, and hates him. So Declan can’t help out in the normal fashion, so he hires Cruz as a sort of undercover bodyguard. When Elliot was attacked in his office, he made a police report, but Declan is sure there is more to the story.

There are immediate sparks between Cruz and Elliot, and an instant connection. I was worried that this was going to be a super obvious ‘You lied to me and therefore everything between us has been a lie’ thing since that seemed obvious and predictable. Whenever you’ve got a guy going undercover or acting without the other person’s knowledge, that seems to be how it works. Cruz does acknowledge that their connection means he’s going to have to tell Elliot the truth, sooner rather than later.

There is a small part of that ‘You lied to me and therefore everything between us has been a lie’ but it was significantly overshadowed by everything else that happened. Which is good. I can’t say the book is predictable. I knew there would be a bad guy, because obviously someone attacked Elliot, but I didn’t predict who it was or why. I couldn’t have predicted quite how that whole scene went down, and I didn’t predict how it would resolve some of the drama between Elliot and Declan.

The relationship between Cruz and Elliot was rock solid within the space of…what, a day? That’s a bit ridiculous. This is a novella though, and we get an epilogue that gives us the impression that they continue to get to know each other and strengthen and deepen their relationship.

I gave it three stars. It was a good read.  Because it was a novella, it lacked a little depth, but I enjoyed it. It made me want to read other books in the series, which is always a good thing. I probably wouldn’t re-read it, because I think it gained something from the unpredictability, which would be lost on a re-read. But yeah, a good read, and I think if you were reading the series, it’d be well worth including.