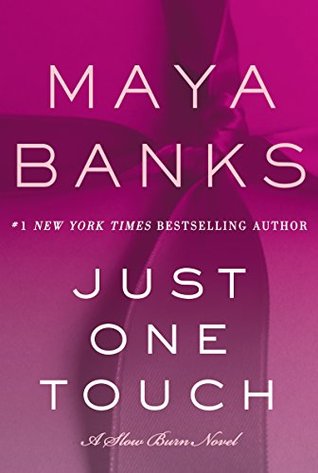 I have just finished reading Just One Touch by Maya Banks.  Maya Banks is probably my favourite author, which is really saying something when you read more than 140 books each year like I do.  I loved her Montgomery and Armstrong series, set in historical Scotland, which started with Never Seduce A Scot.  I have reread it a number of times.  I also loved her contemporary military KGI series, especially Whispers in the Dark, the fourth book, which I’ve reread a number of times. And I really enjoyed the first three books in the Slow Burn series which are contemporary military romances with strong paranormal aspects.  I’ve read quite a few of her other books too, including a few of her more risque books.  So, having said all that, Just One Touch, the fifth book in the Slow Burn series, is so below Maya Banks’ normal standards. I rated it just one star.

First off, there was the instalove. Jenna is a healer, and when Isaac is shot, she heals him. This is their very first interaction. Apparently Jenna doesn’t just heal Isaac’s body, but his soul too. He likens to her to an angel. Despite others she heals having very similar reactions, Isaac decides he is in love with Jenna, and she has no choice but to love him back. There is virtually no mention of any other facet of Jenna, just her amazing healing ability. He barely even knows her.

Jenna has lived an extremely sheltered life. She has never been touched in kindness by a man, let alone had a kiss or fallen in love. She falls for Isaac’s worship of her, and believes they are meant to be together. Again, she barely knows him and is more in love with the idea of being loved than anything particular to Isaac.

Secondly, Isaac’s ‘love’ for Jenna is more like obsession. There are numerous mentions of how he can’t ever let her go and how lucky it is that she loves him too because he wouldn’t let her go either way.

“God, I’m such a bastard to even think that way, much less say it out loud, when you’ve been a prisoner for damn near your entire life, and yet here I am locking you up again and refusing to free you. But honey, it will be the sweetest of prisons. I swear on my life that I’ll spoil you ridiculously and pamper and take care of you and love you so damn much that you never look at it for what it is—a prison—but instead you’ll only see your forever home.

Um, what? That’s so wrong, not to mention illegal. Just because you treat her well doesn’t mean that you can take away someone’s freedom and right to choose.  He even acknowledges the similarities between Jenna’s kidnappers and himself, noting that the only difference is that he would adore her instead of using her. Her permission seems irrelevant.

He swallowed back his sudden insecurity, because Jesus fuck, he was as crazy and obsessed and over the top as Jaysus, only Isaac’s obsession was with making her laugh, smile, giving her every single thing, no matter how large or small, her heart desired from now until the end of their time on earth together. And then he’d simply follow her into the afterlife, where he’d continue driving her every bit as crazy as he knew he’d likely drive her in this lifetime, and he felt not one iota of remorse, nor would he ever apologize, for his brand of obsession.

It’s all so wrong. And so shockingly beneath Maya Banks’ normal standards of book. Do NOT be put off Maya Banks if you haven’t read her other work. I’d even recommend the first three books in this series, where we meet Ari, Gracie and Ramie. Those three books were fantastic. The fourth didn’t do much for me, but this fifth Slow Burn novel is not worth your time and attention.